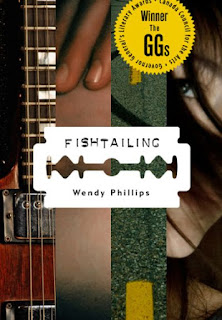 It's an adrenaline-fueled moment when I see the subject line in the email:  "Possible cover image for...".  To see how a designer imagines my story, works it into images, massages metaphors into the symbols, colours and font design makes the publishing process real.  I won't share until it's confirmed and released, but I'm happy with it.  I have students who obligingly tell me they won't judge a book by its cover, but as a librarian I know it happens all the time.  I do it too -- there's an emotional quotient to a cover that affects readers before they read the title page, and designers who get it right know how to strike that fine balance between the content of the story and the audience appeal.

The cover of Fishtailing gave me a jolt.  It was strange to think of someone putting hard images to the characters who had taken such deep root in my imagination.  I saw where they came from, and the click of shared understanding made the somewhat frightening process of publishing my book a little easier.  It was out there in the world, on its own trajectory, not just a piece of myself.

I appreciate the emotional connection with the cover designer of my second novel, Baggage, and I look forward to the connection with readers as well.
Posted by Wendy Phillips at 3:12 PM