Progress on the new novel, Baggage

Here's an update for the new novel.  Baggage cover copy has been worked over, the cover is almost finished, and we are working on a good place for a book launch.  The first launch will be Vancouver, where the book is set, but I'm hoping to have some celebrations in Victoria and Gabriola as well.  Exciting days ahead!
Posted by Wendy Phillips at 6:25 PM No comments:

The snow has arrived in swirling blizzards that have left towering, soft piles of white over the South Coast.  Our little island, which has blithely gone about its green business while the rest of Canada shivers in the grip of a massive Arctic outflow, is reminded that we are, indeed, part of the country.  Everything I had planned for the last two days has been cancelled.  I got my exercise clearing the driveway with a snow shovel.  As I did, two neighbours passed on their morning walk, and predicted, "Those people who have just moved here to get away from this weather will be thinking twice.  Eight days without power in December and now this heavy snow?  They'll believe we lied to them." 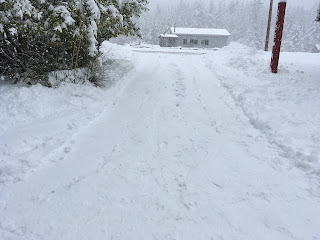 Our island is full of transplants.  Rarely do I run across a person who was born and brought up here.  The island has been subject to wave after wave of incoming groups -- the farmers and brickmakers, the back-to-the land hippies, the environmental activists, the artists and musicians.  The latest group has been the retirees. Those who can work from home (like writers and artists) or those who needn't work at all choose the island because it's beautiful and friendly and more affordable than the big city across the strait. The First Nations people who originally populated the island have left their ghosts in petroglyphs in the forest and the white middens that mark generations of shellfish harvests.  It's rare to find a descendent among the current citizens. 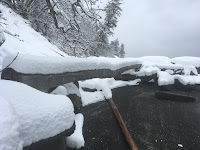 I grew up with big snowfalls in the Interior and today, as it piles up on the bamboo and pampas grass and yucca plants, I am reminded of the way it used to cover the brown grass and weigh down branches of apple and poplar trees.  But it's different here.  I'm a transplant, like the windmill palm tree next door.  The snow is foreign to us.  Even though I have lived on the coast longer than I lived in the Interior, I still feel the strange breath of salt air by the ocean, laden with moisture and blurring from one shade of grey to another.  The snow from my childhood was to be expected.  This is an exotic gift. 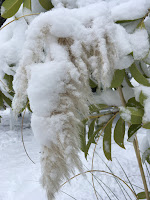 For many it's a struggle to make a home in a new place.  The air is different. The native plants don't smell the same.  Familiar faces have been left behind. And the harsh realities of the new don't always match the expectations of what they hoped would be a new and better world.  Making friends can be hard work, full of awkward misunderstandings and discomfort with strangers.  People come from wildly different circumstances, dreaming of a place that feels like a home but often not certain how to create one. 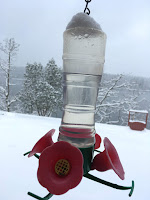 I've lived as an outsider often.  My university campus was 3,000 km from my hometown.  From there, I travelled to the high mountains of Southern Africa, where I loved the people and the culture but was constantly reminded that I was a transplant.  In Australia, I loved the friendliness and the strange flora and fauna, but there too I strained to understand colloquialisms and always felt the distance between me and them. 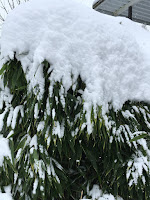 Sometimes I walk the forests or the beach and feel like I've come home.  But there's always an edge of "otherness" about living here.  And as a writer, I see the good in that.  If I'm to see a place, I need to see its geography not as a native born daughter, its actions not as unthinking instinct, its characters not as familiars.  I need to step back for perspective.  I need to measure all that is familiar here with all that has been familiar elsewhere.  I need to see with different eyes.  Being apart can feel lonely at times but in rare flashing moments it also feels like a gift of sight. 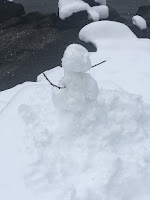 I am reminded of Tennyson's "Ulysses":
I am a part of all that I have met
Yet all experience is an arch wherethrough gleams that untravelled world
That fades forever and forever when I move.

I may sometimes be a stranger here, but that doesn't mean I'm not home.


In the 1980s I fell in love with Barbra Streisand’s anthem for that decade, “Lullaby for Myself” from her album “Superman.”  It was the time of celebration of a bleak truth that we are, at our core, discreet individuals, solitary entities, singularities.  The joy of living alone, of owing no one an answer, of not sharing “a pair of pork chops when you crave champagne and cheese” – I was sold.  My friend and I argued about the final lines – was it his interpretation: “If just one damn man could share the need/to be alone with me” a message that she wanted to be with someone else in spite of her cry for independence, or was it mine: “If just one damn man could share the need to be alone/with me,” suggesting she wanted a relationship but she also needed her alone time?  We had several loud arguments over that line ending.

I have always enjoyed time alone.  There’s something delicious about being able to act or speak without being watched.  Maybe that’s what appeals to me about writing, for the act of writing is, for me, a deeply solitary endeavor.  If I’m not physically alone (Virginia Woolf famously said that what a woman writer needed was “money and a room of her own.”) I must somehow shut out all the sound and fury of the world outside me, and disappear into my own isolation in order to hear an inner voice.

When I go back to the city for a visit, surrounded by traffic and crowds, I wonder how I ever lived there.  I long to return to the deserted winter beaches and forest trails of my island. I love to curl up with my book in a quiet house in front of the fire. I relish my study, where I can close my door and vanish into my imagination.  The trail to nowhere beckons me.

Yet, when I have drunk my fill of being alone, when the sound of my own voice begins to bounce irritatingly around in my head, I have to reach out.  I join the weekly walking group and tramp the trails with 30 plus people instead of alone. I go farther and faster, and I talk non-stop when I’m with them.  I go to rehearsal for the play I’m part of, work on scenes, drink tea and stack chairs and share lives.  I go online and read and respond to posts from my communities.  I invite neighbours and friends for dinner and cook all day in anticipation. Our little island has a thousand ways of being alone together.

Sometimes I take a ferry to the city, where I walk through downtown streets, craning my neck at the tops of the towers, nodding to strangers on the seaside walking trail, enjoying the buzz on the crowded Skytrain, drop in on old friends and soak up their company.  I’m not sure why, when I embrace solitude, but I recognize that being with others feeds my soul. I return to my solitude overflowing with stirred-up ideas, new ways of seeing, new voices, and the knowledge that the teeming world out there is full of sparks, of sound and fury, of light and delight.

And sometimes, my lullaby for myself sounds better sung in harmony.
Posted by Wendy Phillips at 4:21 PM 6 comments: